Allan Hicks is a local resident with a strong interest in the history of Ballina, and earlier this year he posted on the Blast from Ballina Past Facebook group some photos from his latest investigations. These concern the ruins of a historic sugar mill, improbably located on a golf course. For anyone who knows Lismore well, a slightly similar feature is a very small reminder of Dorrough’s sawmill tucked away in a corner of Pritchard Park in North Lismore.

After extended delays linked to other priorities getting in the way, and after unsuccessfully trying to line up a few other topics, eventually the Christmas-New Year period provided an opportunity to check things out on a warm sunny afternoon. The former sugar mill is located at the Ballina Golf and Sports Club in East Ballina. The best access is via Eyles Drive, where the houses on the left give way to the links, and the ideal spot to park is under the shade of a fig tree at the far end of this open zone.

From this side of the course, the approximate location of the old mill can be identified by using as a landmark a large bamboo clump located diagonally off to the right. To avoid the risk of disturbing a fairway drive or being hit by a stray ball, the best way to approach it is around the edge of the course. Seemingly ignored by golfers, it is located at the western end, in an area that fortunately sees little ball traffic. It lies close to the perimeter vegetation dividing the golf course from the North Creek estuary, and this proximity is no accident, given that during the pioneer era waterways were the only highways for trade.

The air is full of the sound of cicadas, occasional high-pitched bird calls, and a call from a bar-shouldered dove. Meanwhile the bamboo clump provides an ongoing clacking, creaking, knocking and scraping, and casts a shadow that extends nearly as far as the sugar mill remnants. 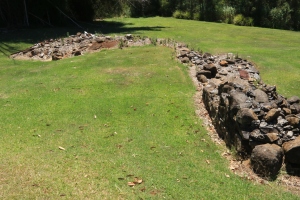 What remains is a low L-shaped vestige of rock and mortar construction with fleabane weeds growing out of it despite the absence of soil. A sign indicates that is the remainder of the boiler room, from around the 1880s, with an accompanying photo of several buildings from the facility grouped together. 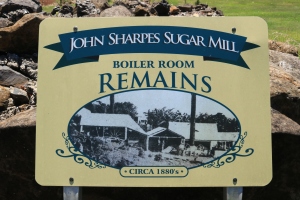 At one corner is a decayed tree stump. Sitting on top of the remains is a rusty metal flap that may have once been attached to of one of the boilers. 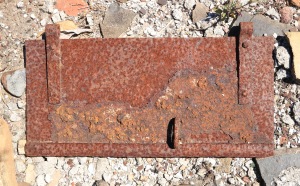 Close by is a large, similarly rusty, washer, and improbably, what looks like a clay washer. At the end of the bottom ‘L’ are various small structural-looking pieces of rusted metal and old wire. With his detailed eye, Allan observed that the mortar between the rocks has shell grit in it.

This construction was carried out on behalf of John Sharpe, one of Ballina’s early pioneers. After emigrating from Ireland, he settled at Kiama on the NSW South Coast, where he grew wheat. Later, travelling by boat to the Ballina area in 1865, he selected a property near North Creek known as Prospect. On the east side, it extended all the way to the Pacific Ocean, a kilometre or two away, while the west creek-side was marked by a swamp. His brother owned an adjacent piece of land, and both were engaged in farming. His legacy is remembered through Sharpes Beach, close to Skennars Head, and John Sharpe Street round the corner from the golf course. 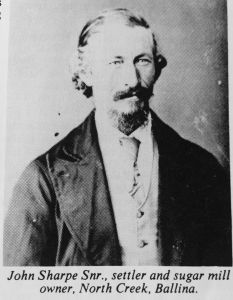 As an important sugar pioneer, John Sharpe grew the first cane along North Creek, and built the first sugar mill, one that was steam-powered. This was co-owned with his son-in-law and business partner Ewan McKinnon. The mill is the topic of a fairly long and detailed eyewitness account, accessible via Trove, that was published in the Northern Star, on 29th April 1882, page 3. 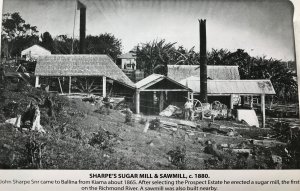 Eventually it closed down, as did several other smaller sugar mills dotted about the lowlands, mostly as a result of competition from the CSR (Colonial Sugar Refining) mill at Broadwater, one that still exists today in a much-expanded form.

In a video he posted, Allan had drawn attention to a nearby wharf that he was confident had been used by the sugar mill. On the map, there are three jetty-like structures projecting into North Creek, of which the southernmost matches Allan’s directions. His video imagery confirms for certain that this is the correct spot. Despite some nearby weeds, bitou bush, and mangroves, walking the few metres over rocks to the end is fairly easy. While it is not easy to see at first glance, all three sides of the jetty have straight and even edges, with the rock assembled to form well-constructed walls. A white barnacle-encrusted object lying nearby looks like a small sink, and looking further afield there is a panoramic view of the estuary.

One of Allan’s images involves the grave of John Sharpe and his wife Margaret, which was easy to track down in the Pioneer Cemetery tucked away near the junction of The Serpentine and Park Street, near Missingham Bridge, and close to the stretch of North Creek frequented by estuarine beachgoers. At the cemetery, the graves are mounted into a stretch of circular wall. Some that are older-looking can only be read via the engraving, while those that appear the freshest and newest typically have black writing on a white background. John and Margaret Sharp’s grave is one of these.

A glance at the markers shows a lot of people dying in their 30s and 40s, suggesting the challenges inherent in being alive in the 19th century and the early years of the 20th. In most cases, the cause of death is not specified. By contrast, John lived to the age of 85, dying in 1898, with Margaret following a year later, aged 84. 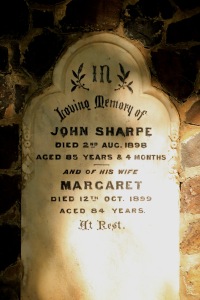 Although it is easy to remain oblivious of this slice of Ballina’s history, it feels good to check out the Sharpe family, even if this was heavily reliant on Allan’s sleuthing efforts rather than my own.